So I am back with some thoughts and such on Project Runway All Stars and it’s happenings. I missed last week’s post because my Thursday night was very hairy, as was my Friday… I didn’t even end up watching Episode 7 until Sunday at some point. Anyway, that episode made me sad, as we bid farewell to my lady Kara Janxy poo. According to the judges, she just wasn’t the caliber of designer that the rest were, or something like that. She was extremely disappointed and frankly, she just seemed exhausted. My poor pumpkin. I love her designs dating back to that wrap dress from her season.

So Episode 8 brings our remaining designers (Austin, Mondo, Mila, Jerrel, Michael, and Kenley) to the United Nations, where each designer will create a look based on a country’s flag and indigenous culture. Mondo won last week so he gets first choice, Jamaica… Michael chooses Greece (because as he tells us multiple times in the episode that he is Greek afterall), Mila chooses Papua New Guinea, Jerrel gets India, Austin has the Seychelles and Kenley is left with Chile.


This episode, I really hone in on my distaste for Mila. She is a wretched creature. She has made comments for the past 4 episodes about how she doesn’t understand how the other designers “help” each other and give each other advice. She mainly dissed my girl Kara and Kenley’s friendship… perhaps she was jealous? Eh, she quips, “It’s a competition, after all.” Thank you, Mila. We didn’t know this was a competition. At the end of the day, each designer is responsible for what they put on the runway and if I were in that situation, I would try to make friends with people too. Geesh, I don’t even like Kenley that much but I am happy that she has Austin now that Kara is gone. Mila is wretched and Mondo seems to like her, which I don’t understand.


So the designers toil away. Michael’s design makes me (and everyone else) think “pageant” dress. Jerrel embraces India in a very traditional manner. Mondo showed a slinky black number. Austin had trouble with his fabric choices and draping. Kenley did something very Kenley… and Mila, sweet Mila, presented a half short/half long dress that has the colors of the flag but nothing to do with that nation. She has some BS explanation she kept hocking the whole episode about freedom or something. I didn’t buy it and neither did the judges. It was fugly and everyone knew it. Isn’t it funny Mila? It wasn’t important for you to make any lasting friendships or be helpful to other designers sooooo no one told you that your design was pretty sucky. It is a competition after all. She got booted and I smiled.

Mondo won this episode and I am feeling that they are getting us ready for his triumphant overall win, making up for Gretchen winning his season. I still hold out hope for Austin though as he is my boo.

Yes, I am still watching Project Runway All- Stars. I didn’t write about it last week because while it was airing, I was literally in the air. Being that a trip was underway, I didn’t get a chance to watch PR All Stars Ep 4 until a little before Ep 5 aired last night. I will recap episode 4 in the shortest paragraph possible then work on highlighting last night’s episode.

Episode 4: Most Boring Premise Ever… designers were challenged to create a look inspired by… Gelato, yes, the ice cream like frozen treat Gelato. Were the producers sitting in a conference room somewhere pondering what would be a fantastic idea for a show, tossing ideas back and forth only to land on Gelato? It was an awful and uninspired episode. The only highlight for me? Seeing whiny, ungrateful April Johnston go home. She had blueberry flavor and created a monstrosity, end scene.

Last night’s episode… well, it picked up some steam in comparison to the episode prior. Our designers were brought to Union Square park and tasked with #1 finding a muse  #2 convincing people to let them, literally, take the clothes off their backs #3 Use their “street” clothes for at least 50% of their look. Now we’re cooking with oil. It was in these park scenes where I remember why I love Anthony Williams so much. Favorite line of the night? Anthony yells, “Hi Hot White Guy!”at a very fit gentleman with no shirt on. Austin then remarks that he was the one who got Hot White Guy’s phone number… well, well, well…cheeky designers.

Some designers have better luck than others but at the end of the day, every one gets somethings from the street folks, something from Mood, and then begin designing. Mondo jumps right in and is adorable, working diligently on his look, which Joanna Coles thinks is right up his alley. Jerell, surprise surprise, thinks very highly of himself and his barely there swimwear-ish type gypsy look. Anthony keeps changing his mind about what he is going to do. Michael is struggling to be inspired yet finds time to talk smack about Kenley to Mila (who, by the by, is a b!tch)…

Anyhoo, fast forward to runway show. All the girls are safe. Kenley gives a huge smile to both Kara and Mila, which Mila returns with a hate filled glare. All the boys are our best and worst designs.

Jerell, Michael and Anthony are in the bottom. Jerell for obvious reasons, Michael for creating something ill fitted and way too short and Anthony for not using enough of the “street” fabric in his design. Here I think to myself, there is no way that they will send Anthony home when Jerell’s look is so hideous. Well, apparently they will. Anthony goes home… and tells Micheal to stop his crying.

Our top designers are Austin, Rami and Mondo. While I really did love Austin’s look, I had to give it to Mondo. He used all fabric from his street looks, worked super hard and made unbelievable garments in a short period of time. His little jean/ military green jacket? Amazing. (Erin, I may be converted) Of course, and at last, Mondo took the win.

So while I started off whiny about Project Runway All Stars, now that we are getting down to the truly talented designers, I am pretty much in it for the long haul. I am rooting for either Mondo or Austin to take the home the prize but I am not counting Micheal or Rami out just yet.

So as I start every post, I warn you that I will spoil the episode… so that being said, if you still haven’t seen it, do not read this post… unless, of course, you don’t care about having the winner and loser shown to you in advance. I would also like to apologize if I seem negative about something that I, as a fashion lover, should adore. If something I love disappoints me, then I am going to let it know.


Oh Project Runway All Stars, how I have a love-hate relationship with you. I love to hate you while watching an entire episode geared towards Miss Piggy, who I generally adore. I love to hate all the designers. I love to hate what divas they have become… I don’t love to hate Host Angela Lindvall though… She seems to have no personality at all.

Our designers have been tasked with making an outfit for Miss Piggy to promote The Muppets Movie (which has been out for months so I found the timing to be weird). I do love that every single designer seems to embrace this challenge as something fun and out of their comfort zone. I do, however, get irritated by the end of the episode as each and every designer talks about how excited they are to meet Miss Piggy. They are all talking about her as if she was a real person. This is where I feel like I don’t know how to have fun anymore. 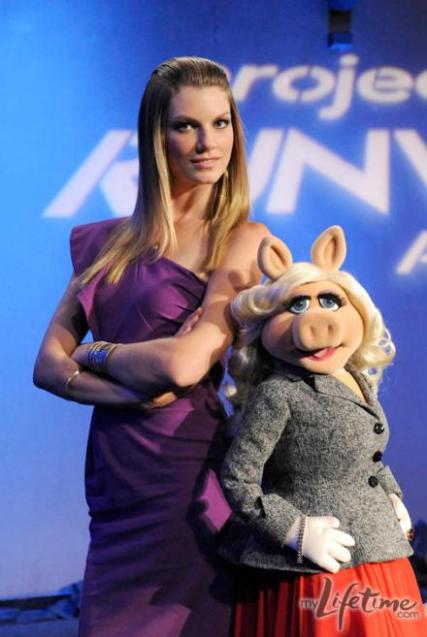 Designer highlights (or lowlights) from this episode?

Rami Kashou: He was in the top this week for bringing it this challenge. What does Miss Piggy want? I have a feeling she would want over the top. We can thank Rami for going there.


Kenley Collins: Despite my mild distaste for Kenley, I was digging this pink giraffe print jobbie that she created. It landed her in the top and I would have to agree. It fit the challenge and she did a good job. I also want to ask her what she did with that teal sheer fabric she did not use… because Mama wants the scraps!

Michael Costello: And for the win! Surprise it’s Michael Costello. I will admit, I did not think Michael would win this challenge because I felt Rami did an outstanding job making a Piggy-licious frock but Michael;s gorgeous dress won over the judges and I am not disappointed… and way to go Michael. Underdog it is. On a side note: Does Michael’s model look familiar to anyone else? Maybe she was on America’s Top Model? Anyone?

Anthony Williams: Personally, I thought Anthony had the best design. I actually find myself still thinking about this dress as I am writing this post. It was fun, flirty and totally wearable. I loved everything about it. Unfortunately for me (and Anthony) it was only good enough to keep him safe this week.

Austin Scarlett: My dearest Austin… I have not even started my first fashion design class and I could have told you that a bow on either side of Miss Piggy’s hips would be a bad idea. I was saddened yet not surprised when you landed in the bottom three.


Mila Hermanovski: All I have to say to Mila is… No single designer is too good for a challenge. Your aesthetic is not Miss Piggy’s aesthetic. I hope being in the bottom three taught you a lesson tonight, Mila.

Gordana Gehihausen: I was really starting to like Gordana. I think I mentioned before that she might have been forgettable (to me) in her season. In the mere three episodes that she graced Project Runway All Stars, I felt as if she was a solid craftswoman with a good head on her shoulders, something I can totally appreciate. Unfortunately, her design also landed her in the bottom three and unfortunately OUT. When I saw our bottom three (Mila, Austin and Gordana), I knew that Gordana’s fate was sealed…. doesn’t mean I won’t miss her.

What did you think of last night’s episode?
Project Runway All-Stars, Episode 3